When it comes to property buyer leagues, month-on-month, Istanbul is always top of the charts in Turkey. Foreigners have a long and enduring love affair with the beautiful city.

The recent construction boom; enormous potential offered up by the third airport and the luxurious quality of the property on offer quickly lures investors of many different nationalities who have fallen in love with the 'city of a thousand sides.'

However, with thousands of homes for sale, and so many neighborhoods on the Asian and European continents, where does a potential buyer start to look at what’s on offer? Here are our suggestions of the most popular areas to buy property in Istanbul according to price, investment potential, and location specifics.

Esenyurt and the New Istanbul Airport

The outstanding performer of 2016, this district attracts many because of its proximity to the third international airport, opening in 2018 that will be one of the biggest and best in the world. Properties are also easily within the budget of the lower to middle-income bracket families, and plans for a new metro-line will mean speedier access to other parts of the city. Within the last four years, property prices have rocketed 150 percent from 800TL per square meter in 2012 to an incredible 4.000TL in 2016.

Bağcılar: Mass Potential for the Future

Slowly emerging from its working-class roots, developers are now eyeing up the Bağcılar district as one 'to do up' in the next five years. Its narrow streets offer a look at the more attractive side of Istanbul, and the area is home to some of Turkey's largest media firms. A thriving down-at-heel suburb, but one that offers potential property buyers value for money. 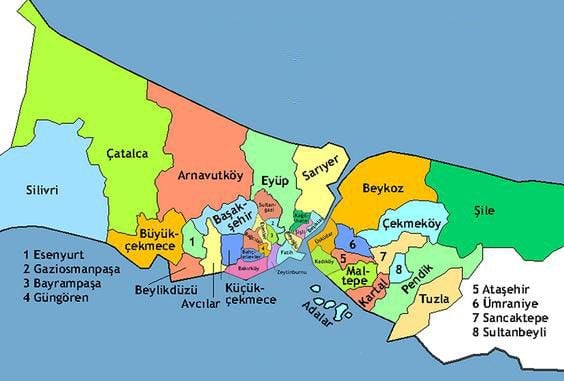 Kadıköy: The Latest Place to Be Seen

With over 7,000 properties bought in 2016, Kadıköy, on the Anatolian side of Istanbul, is a mix of student accommodation, fantastic markets, and a thriving street bazaar. Families are easily attracted because the suburb has everything from shopping malls to Turkey's biggest fish market and the city's central transportation hub.

One of the neighborhoods that all Istanbul families aspire to, simply because of the luxury property that abounds in this quaint 19th-century area which has quietly thrived off the back of the Galata trading community. Foreign investors are also enticed by the area's proximity to the Bosphorus River, and it is home to many millionaires and city influencers.

Up and Coming Beylikdüzü

With over 10,000 properties sold last year, Beylikdüzü has become one of the most popularly searched for areas for foreign investors. And why not? With new infrastructure and a metro line, it offers plenty of homes for modest budgets averaging upwards of 235.000TL. The area is also receiving an infusion of new modern apartments to mix with the suburb's more traditional pockets.

Büyükçekmece, sitting quietly on the city's European side, saw a turnover of more than 5,000 properties in 2016 alone due to its views over the Sea of Marmara coast. Some of the best family villas, with prices closing in on 1 million GBP, mean the well-heeled suburb attracts affluent retirees or wealthy property investors.

A key residential area that is, according to many real estate experts in the city, on the up and up due to the diverse housing available for the savvy investor. The combo offers apartment blocks through to homes on the waterfront, and villas for families looking to have one foot in the city, and foot in suburbia. Crucially, Pendik was among the top areas for property sales in 2016 and has remained stable throughout 2017.

Cited as one of the most exciting regions with mass potential for the future, Arnavutköy offers closeness to connecting roads to the new airport and bridges, enhancing its connections to Istanbul and further afield. Investors with an eye for the long game are moving into the area. The neighborhood is also known in travel circles as one of the quaintest, thanks to the old architecture of long-standing houses.

This area, close to the Marmara Sea offers the best of middle-class property for growing families. With safety and security, a priority, families are targeting the area for its apartment and low-rise units, and fantastic potential to see property prices boost their net worth portfolio. It is one of the lesser talked about places in Istanbul, but well respected for its harborside restaurants.