The Sultanahmet district of Istanbul is the heart of the old city, where rulers of the Ottoman and Byzantine empires made momentous decisions. Naturally, considering its illustrious importance, it is often the first port of call for visitors to Turkey who are eager to see what makes it one of the most important places in the ancient world.

Indeed, if it is your first visit to Istanbul, choose a hotel in the Sultanahmet or Fatih district. This allows ample time to explore the main attractions and landmarks at a comfortable pace over two days. Then if time allows, you can venture out further afield to see other attractions.

8 Impressive Places to Visit in Sultanahmet

The iconic Blue Mosque dating from 1616 is open to visitors outside of prayer times, and the interior architecture of handmade Iznik tiles and stained glass windows makes it one of the most famous landmarks in Istanbul. Its construction caused a great scandal at the time because its architecture outshined that of the Great Mosque of Mecca. The brains behind the mosque, Mehmet Aga, seemed eager to surpass his former master who was Sinan, a talented and skilled man who achieved great fame as the Ottoman sultans’ favorite architect.

The Hagia Sophia garners recognition for its historical status but also as an iconic reflection of religion because it has served as both a church and mosque. From the outside, the large structure may appear bland to some. However, its interior architecture and art never fail to impress. The combination of ancient Christian mosaics sitting alongside Islamic calligraphy on large plaques hanging from the upper balconies is a timely reminder of the building’s importance to both followers of Christianity and Islam. Now officially classed as a museum, it was once the largest domed building in the world, although the version we see today, is not the original that burned to the ground in 404. However, this version is still timeless considering its construction date of 537.

The Hippodrome of Constantinople

Sadly, little remains of the Hippodrome that was the social center of the Byzantine Empire. Sitting next to the Blue Mosque, its most pivotal moment of fame was probably the famous Nika riots of 532 when roughly 30,000 people died. At other times, locals gathered there to cheer on the chariot races and participate in political discussions. These days, only three parts of the ancient structure are still visible including the base of the Serpent column of which the heads are now in the Istanbul Archaeology Museum. The walled obelisk is a relatively plain structure, but the obelisk of Thutmose the 3rd, carved from pink granite has astonishingly survived for nearly 3500 years. 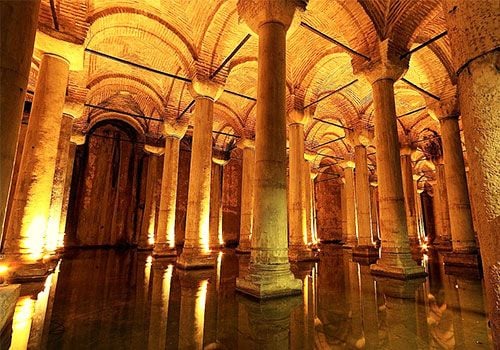 The Turkish and Islamic Arts Museum

This small but impressive museum sits in the house of a former Grand Vizier to Suleiman the Magnificent, one of the greatest sultans of the Ottoman Dynasty. Its two main features are antique carpets reflecting the history of the nomadic Turks and religious artifacts reflecting Islamic art. The carpets of which many dates from the Seljuk period are quite stunning considering their use and age. The intricate designs all reflect tribal and urban beliefs and representations. A small ethnographic section also highlights the life of the old nomadic tribes.

Heading across the Divan road, visitors to the Sultanahmet district will discover one of the most delightful landmarks by descending a stone flight of stairs to the Basilica. As the ancient water source for the Ottoman Topkapi Palace, the structure achieved worldwide fame when it appeared in the film by James Bond, From Russia with Love.

It is also in a scene in Dan Brown’s latest novel Inferno. Visitors walk on a wooden platform in-between stone columns standing in shallow water that is home to large carp fishes. At the back of the cistern are the prize exhibits of the two heads of Medusa. One is upside down, supposedly to confirm to the old urban legend that anyone looking in her eyes will turn to stone.

Three museums house an impressive and gigantic collection of artifacts from all over the world. The main Archaeology Museum displays items from the ancient age to the Roman era while the ancient Orient Museum focuses on pre-Greek and Islamic items from the Anatolian and Mesopotamia plains. Lastly, the Tiled Kiosk highlights the Seljuk and Ottoman Empires through hundreds of priceless artifacts. This extensive collection is one of the best in the world even rivaling the British Museum, and history lovers will thoroughly enjoy it.

Out of all the places to visit in Sultanahmet, Topkapi Palace should be on your list. The architecture of the Topkapi Palace may seem considerably unattractive compared to other more elaborate palaces of the Empire however it was the first home of the Ottoman Sultans when they conquered Constantinople in 1453. Performing as a fully functioning city at one stage, visitors tour the mass sprawling network of courtyards and rooms including the circumcision quarters, kitchens, clothing, jewelry, and old relic exhibits. Most praise, however, seems to fall on the harem, dating from the 16th century where the sultan’s wives and their favorite female companions lived. Steep in intrigue and many whispers behind closed doors, it evokes images of an era no longer lived.

Relax and Enjoy the Tranquillity of Gulhane Park

Sitting adjacent to Topkapi Palace is a beautiful spot seemingly out of place in the middle of Turkey’s biggest city. Previously part of the Palace, Gulhane Park opened to the public in 1912 and even contained a zoo at one stage. It is a relaxation haven, at all times of the year and a great place for bird-watching but is exceptionally beautiful during April when the local council plants thousands of bulbs to celebrate the annual tulip festival. 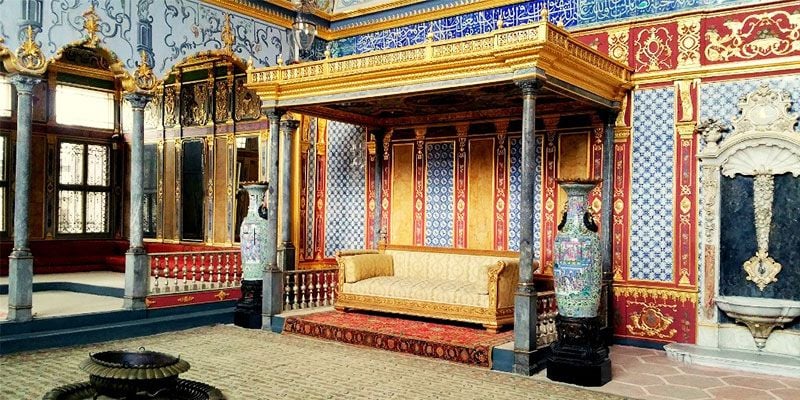 Most foreigners after exploring the places to visit in Sultanahmet, head down to the Grand Bazaar, a sprawling network of corridors and courtyards making up one of the world's largest places to shop. Traditionally still adhering to the traditional Ottoman custom of grouping shops together depending on the items they sell; it is now a favorite touristic venue as foreigners buy souvenirs while attempting the ancient art of haggling.

From there, after a brief visit, they cross Galata Bridge to see the fantastic panoramic view from Galata tower and head to Taksim and Beyoğlu, the modern part of Istanbul.

As a shopping and nightlife hub, the backstreets also throw out pleasant surprises such as antique shops and the Pera Museum holding the Tortoise Trainer, one of Turkey’s most expensive paintings.

Alternatively, if you want to continue your discovery of where the Ottoman sultans used to live, head to the Besiktas district where the Dolmabahce palace sits. As the last home of Ottoman royalty before they disbanded, it is one of the world’s most elaborate palaces.

Travel Tip: Most of the places to visit in Sultanahmet are part of the Istanbul Muze Card scheme. On sale at many points throughout Istanbul, it is an excellent way to save money on entrance fees and tickets, and for hard-core explorers, the savings soon add up.

Author
Sena SaatcıoğluEditor
I was born in Antalya, Turkey. For my university education, I went to İzmir in 2013. I studied American Culture and Literature ...
Comments