About the Ottoman Palaces in Istanbul

The ruling Ottoman dynasty lasted for more than 500 years, and during that time, their use of palaces changed dramatically. At the beginning of their reign, these buildings were functioning establishments from which they ruled their empire. Decisions and orders made in them shaped the future, not only for them but also for the rest of the world.

The most obvious example of this, is the Topkapi Palace, the first home of the Ottoman dynasty when they invaded Constantinople. Then over time, the sultans built some as summer residences, on the shores of the Bosphorus. Their subordinates also built elegant summer houses called Yali houses on the Bosphorus. These days, some have sold for millions of USD making them the most expensive real estate in the world.

Architectural styles and use of these royal residences changed over hundreds of years, but mostly, the layout remained the same, and always included the selamlik section for the sultan, and the harem used by his wives and concubines. These days, learned scholars eagerly discuss the finer concepts of life in the harem. Most importantly that residing women received education lessons in music, art, and writing, all of which were activities socially restricted to the rich and powerful. They also trained in etiquette, and some became the most influential and powerful women of their time.

Indeed, as mentioned before, touring the Ottoman palaces in Istanbul is not alone a glimpse of a former home, but also a great insight into the culture, traditions, and beliefs of one of the world’s great dynasties. 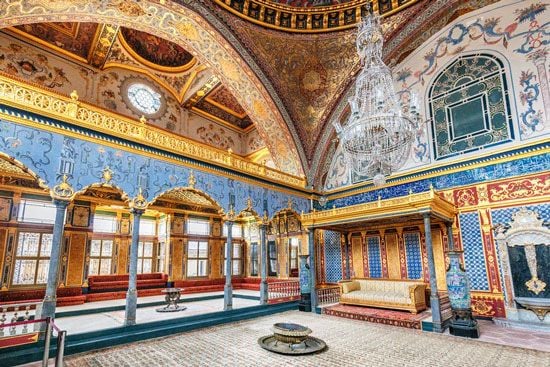 Walking along the path to the gates of Topkapi is a scene reminiscent of a fairy-tale love story. Two towering turrets sitting on either side of the grand entrance called the Gate of Salutations to make it look like a castle, rather than a palace. However, at one stage, Topkapi and the surrounding walled districts housed thousands of people, acting like a mini-city in need of defense not only for royalty but also for the sake of citizens within its boundaries.

From here, visitors take a slight detour to the left to enter the harem, the most talked-about attraction, or they veer right to visit the kitchens, armory exhibition, circumcision pavilion, imperial costumes display, and the relics room holding items belonging to the caliphate as well as the prophet Muhammad. 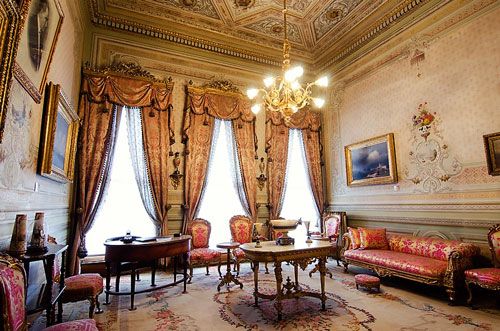 The style and architecture of the “L” shaped Dolmabahce differ significantly from Topkapi. As the second ruling center of the sultans, much hype surrounds its construction in the 19th century because, at the time, the dynasty was rumored to be bankrupt. Including private Turkish baths as well as a magnificent domed hall with one of the world’s largest chandeliers, the crystal staircases, gold-lined ceiling, and pure bearskin rugs are just a few focal features of the landmark featuring combined baroque, neoclassical, rococo, and Ottoman architecture.

Sitting in the well-known Uskudar district on the Asian side of Istanbul, the name of Beylerbeyi Palace means Lord of the lords. It’s another 19th-century construction displaying the baroque architecture favored by the sultans towards the end of their dynasty.

Rather than be a permanent residence, its intended use was to host dignitaries, as well as foreign royalty and officials. Some of its most famous guests, were Empress Eugene, the wife of Napoleon the third, who visited in 1869, and the Duke and Duchess of Windsor. At one stage, the palace had a zoo and was also notoriously, home to the imprisoned Sultan Abdul Hamit the second.

On the same side of the Bosporus and 30 minutes’ walk away, is Küçüksü Palace, another 19th-century construction used by the Ottoman sultans for a short retreat. The interior, reflecting the traditional design of Turkish houses also features the best in décor such as pure silk Herke carpets. Open to the public as a museum, film buffs also eagerly remember its featured role in the James Bond film, The World is not Enough. 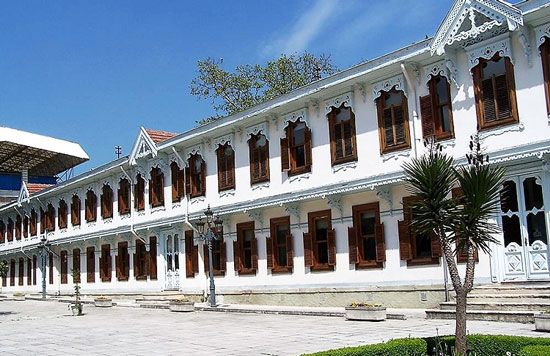 This architectural style of this complex is unique because it is a collection of pavilions and villas surrounding picturesque courtyards. Used as the home of Sultan Abdul Hamid the 2nd for 33 years, the complex at one stage covered 500,000 square meters and was the setting for political, business and religious functions. Waiting on the tentative list of the UNESCO World Heritage site for approval, it is also an excellent example of 19th-century architecture.

One of the most intriguing stories of former Ottoman palaces in Istanbul is Ciragan, a five-

star luxury plus hotel offering the best of Turkish hospitality. The current landmark building takes one of the prime spots in the portfolio of the Kempinski chain of hotels accommodating some of the richest people in the world. After a fire destroyed it in 1910, it remained abandoned apart from brief use as a football field. However, following extensive renovations in 1992 and 2007, new owners restored it to its former glory including the décor style and design so befitting of its illustrious historical timeline. Staying at the Ciragan Palace is about as close as you can get to experiencing the vibes and nostalgia of the former Ottoman palaces in Istanbul.

Further reading: You may also like to read our article about the best museums to see in Istanbul. Featuring art, ethnographic, and ancient artifacts, the museums help any first-time visitors to fully understand the timeline of Istanbul, both past, and present.