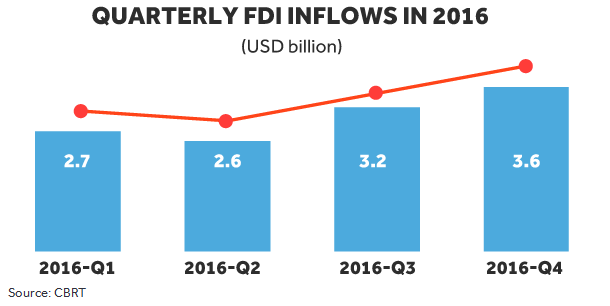 In their March newsletter, the Investment Support & Promotion Agency of Turkey (ISPAT) released FDI figures for 2016. The foreign direct investment stats show that despite a disastrous start to the year, and a culmination of negative incidents and events, that investor confidence in the Turkish economy and business sectors are still strong.

As the fourth quarter closed for 2016, foreign investment in Turkey was not only the highest for the whole year but also for the previous 17 months, stretching back to 2015, when sectors like the tourism industry were still in full flow. 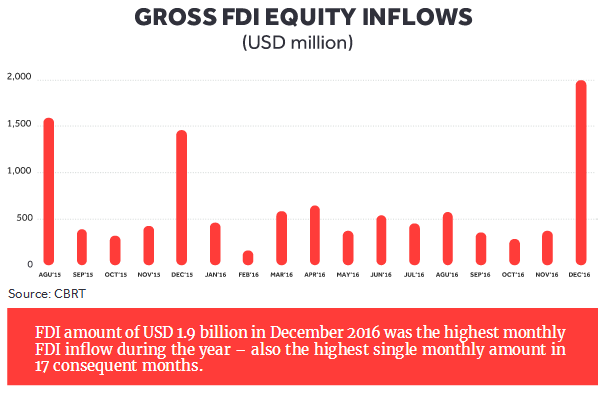 Breaking the Figures Down

The stats collected by the Central Bank for the Republic of Turkey, total foreign direct investment for 2016 at a staggering 12.1 billion USD. The poor start to 2016 was contributed towards global contraction, with February proving to be the weakest month for the whole year.

Figures mostly remained static for the remainder of the year, especially when the country kicked into action to show that life was as normal after the July 2016 coup. The hard work and diligence paid off as the year proudly closed with 1.9 billion USD of foreign direct investment in December.

The Investment Support & Promotion Agency of Turkey says the figures surprised everyone because forecasted predictions totaled only 10 billion USD.

They credited 6.1 billion USD of the FDI inflow to equity capital, followed closely by 3.9 billion USD of real estate purchases. Countries credited with the largest investments were the UK, Netherlands, and Azerbaijan.

The investment agency predicts FDI figures will continue to be strong throughout 2017. One industry taking a major knock in 2016 was tourism. However, officials are confident that the sector can bounce back to previously recorded figures before safety incidents and the coup concerned foreign visitors.

The Ministry of Economy, Environment and Urbanization, Labour and Social Security, the Banking Regulation and Supervision Agency, and the Turkish Treasury will monitor and regulate the applications accordingly.

To back up their forecasted FDI predictions for 2017, The Investment Department also cited a recent deal between the Turkish Garanti Bank and BBVA Bank of Spain to acquire shares worth 900 million USD. Closing with the following statement of “This deal is indicative of investor confidence in the Turkish economy and its business climate”, they expect FDI figures for 2017 to beat the disastrous results of 2016.

Fitch, the global International rating agency, likewise reflects the optimistic outlook. In their comprehensive report issued on the 6th of March, they said the world economic market is showing resilience against political uncertainty. Concerning Turkey, they expected a moderate economic recovery.

Author
Ayşegül Ersin
Ayşegül Ersin Editor
I was born in Antalya, a beautiful coastal town in Turkey, in 1992. I moved to Eskişehir for my university education ...
Comments